Upgrading to the new version of Windows


Can you run Windows 11 on older hardware?


With Windows 11 having been recently released, we were interested to see how the new Operating System would perform on older hardware not officially supported by Microsoft. The results will be of particular interest to users that have machines currently running Windows 10, and not wanting to upgrade their hardware any time soon.

So in order to test Windows 11 compatibility, we used one of our older laptops, a Dell Latitude 7470, with the following specs:

In addition to having the requirement of a supported processor, Microsoft advise that machines should also have the Trusted Platform Module (TPM) v2 installed and UEFI enabled, rather than a legacy BIOS for secure booting of the Operating System. However, there are ways around some of these requirements, which are discussed below.

In order to prepare our Dell laptop for the Windows 11 installation, we upgraded the onboard TPM module to v2.0 using the latest firmware from the Dell support website. We also converted our ADATA SSD drive from an MBR to GPT partition, so that we could run the EUFI (as opposed to the legacy BIOS) for secure booting. Some useful instructions on how to convert hard drives to a GPT partition, can be found on Windows Central. 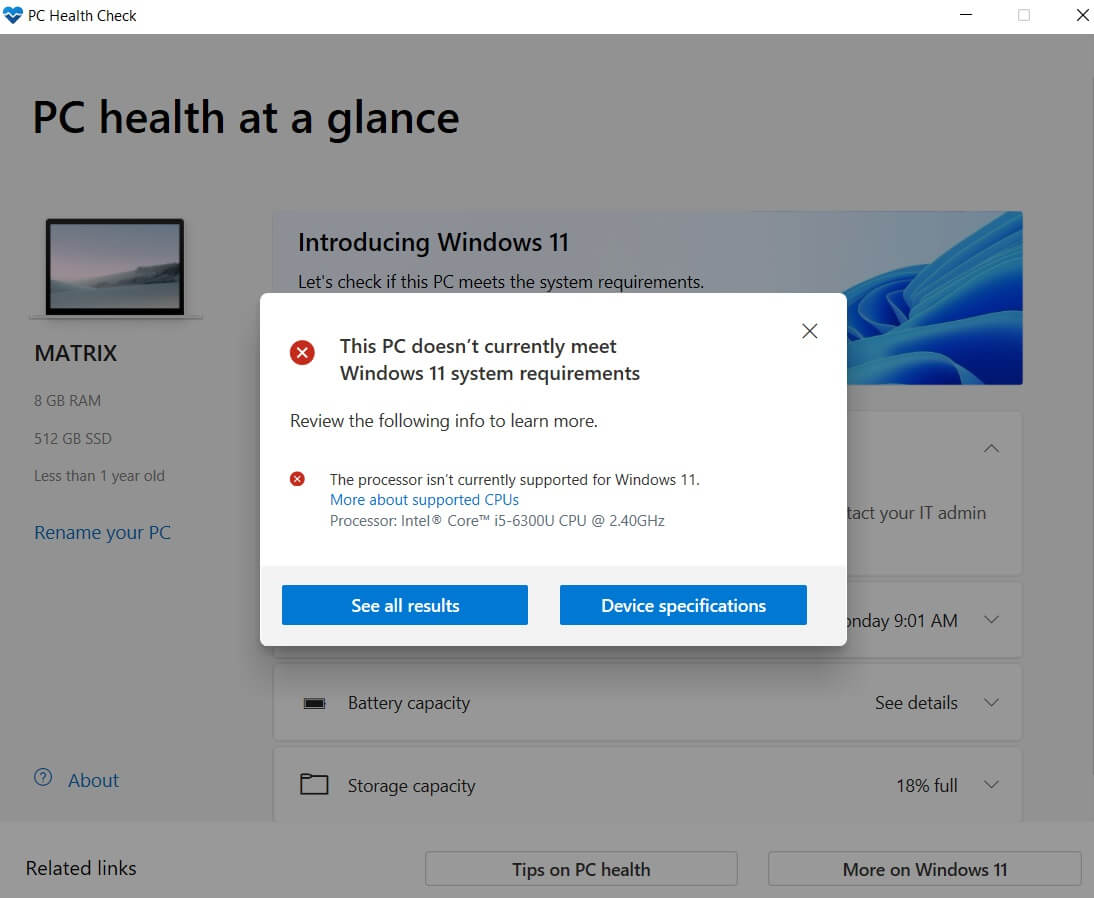 Microsoft provide a useful Health Check program which will advise whether your machine is capable of running Windows 11.

When you run the program, it checks various elements of your computer to see whether it is capable of running the Operating System, as can be seen in the screenshot.

In our case, the health check failed, with the system reporting that our processor was not supported.

Hence, when attempting to install Windows 11 as an in place upgrade to Windows 10, we were unable to do so, with the installer advising about the unsupported processor.

However, there are several ways to get around these limitations, especially where the processor is not supported, or your TPM version is limited to v1.0.

However, there are several ways to get around these limitations, especially where the processor is not supported, or your TPM version is limited to v1.0.

If you want to upgrade your existing Windows 10 installation, keeping all your files and without having to reinstall all your programs, the following registry hack is available:

AllowUpgradesWithUnsupportedTPMOrCPU, with a value of 1.

Once you apply the registry change, you should then be able to perform the Windows 11 upgrade.

NOTE: Only make changes to the Windows Registry if you know what you are doing.

If you are not concerned about keeping your files or installed programs, you can opt to install a fresh copy of Windows 11, by downloading the installation media to a USB drive and booting directly off of it. This is the option that we chose, in order to ensure that we had an entirely clean install.

The necessary tools required to perform an in-place Windows upgrade, or create installation media, can be found on the Windows 11 Downloads page.

The time it takes to install Windows 11 will vary from machine to machine, based on factors such as processor speed, memory, and most importantly, storage device. Our laptop is fitted with a fast PCIe SSD drive, resulting in an installation time of around 20 minutes from start to finish.

Users who have machines with a mechanical hard drive really should consider moving to an SSD storage solution if their hardware can accomodate it. This will avoid having to make cups of tea whilst waiting for windows to load!

Once the installation process is complete, you will be presented with the Windows desktop screen, which has a new look taskbar, visually similar to that of the Apple Operating System. As with previous iterations of Windows, icons can be pinned to the taskbar and/or removed as required. 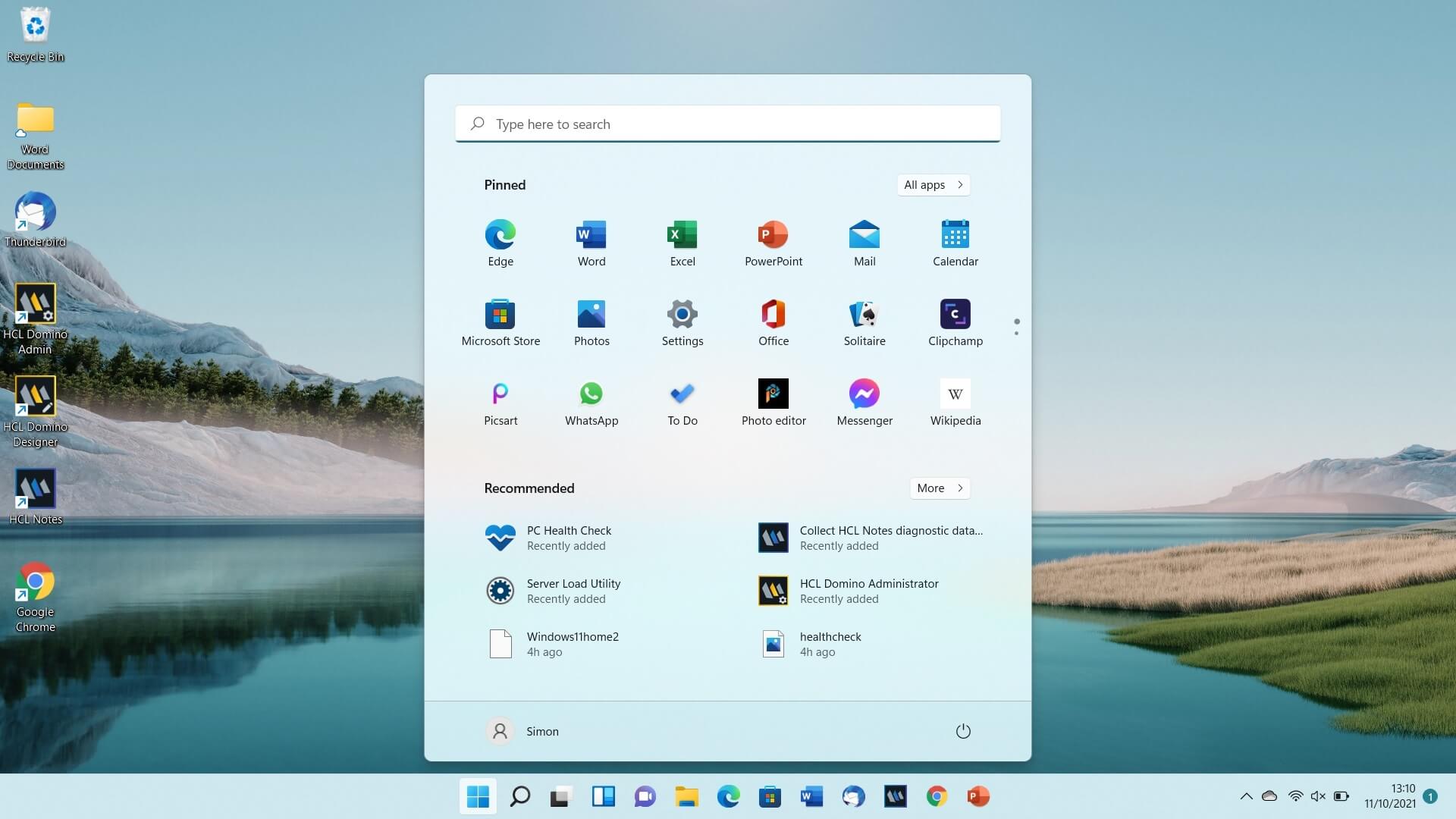 Strangely, Microsoft have removed the search box facility from the taskbar and integrated it into the new start and search menus, respectively. So rather than just clicking in the search box and start typing, as with Windows 10, you now have to click on either the Windows flag or the magnifying glass next to it, in order to bring up the search facility.

Finally, if you are unhappy with the default centralised position of the taskbar icons, you can change them, so they aligned to the left hand side of the screen, in line with previous Windows versions.

In terms of performance, Windows 11 seems to run at a similar speed to Windows 10, if not slightly quicker, on our Dell Latitude. We tested various software applications and scenarios that we use on a day to day basis to see if there were any issues, including:


For the majority of the tests, we found no issues at all and had no program crashes. All we did find, is that in some instances, explorer would hang for around 30 seconds. For example, when choosing the folders to install the HCL Notes software into. However, this will no doubt be fixed in a future Windows update and would no put us off using the new version at all.

Having installed Windows 11 on a six year old Dell Latitude, which is not officially supported by Microsoft, we can confirm that the Operating System does in fact work almost floorlessly. Yes there are a few bugs relating to the Explorer, but overall, the software seems relatively stable, and even slightly faster than Windows 10.

The only caveat with regard to upgrading to the new Operating System, is that your computer should have at least 8GB RAM and an SSD drive. If you are planning to upgrade using a mechanical hard drive, then we would advise against it, as older hard disc technology is just too slow.

If you would like to know more about upgrading to Windows 11, or need assistance in doing so, then please get in touch using the link below and we will be happy to assist you.

Want to upgrade to Windows 11?